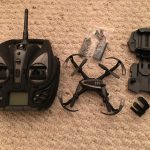 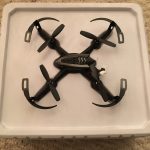 The Goolsky i4w is a small but very capable drone.  Included with the drone is a full featured remote, 350mAh battery, extra set of props, phone bracket, screw driver, charger, and user manual.  The drone comes equipped with a 0.3MP camera that can transmit the image instantly over Wi-Fi to a compatible Android or iOS device where the video or still image can be saved.

The included 350mAh battery takes about an hour to fully charge and is rated for 5min of flying time although throughout my use I was able to get double that even with my lack of flying skills.  The only real complaint I have about the i4w are the included instructions.  They are poorly translated and downright hard to follow.  Thankfully I was able to figure everything out using the images and some good old trial and error.  It took two full battery charges to get everything figured out and another two charges to get comfortable with the controls.  Once I built up my confidence and was comfortable with the controls, I was able to fly it like a pro.  The i4w has all of the usual controls I would expect including up, down, turn left, turn right, fly left, fly right, and speed controls.  A few of the stand out features include a headless mode which means the i4w ignores the direction its nose is pointing and uses the controller to determine the direction.  This is an awesome feature and makes it much easier to fly when you are getting used to the controls.  The i4w also has an automatic flip button which will make it do a barrel role just by pressing a button and then pressing right or left on the joystick to indicate which way to flip.  Another convenient feature is automatic return.  Simply press a button and the i4w returns to its initial take off location.

The controller for the i4w although made completely of plastic, is built pretty well.  The plastic build also keeps the weight down which is nice, especially if you use the included phone mount and mount your phone to the controller.  The LCD display on the remote provides all the necessary information without out being distracting or hard to read.  The inclusion of an extra set of props is nice in case you break the ones that come pre-installed although I have ran into many objects and so far the bumpers have provided enough protection to not hurt the i4w at all.  The included 350mAh battery is a popular design and more can easily be found and purchased on Amazon.  The same goes for the included charger which is capable of charging two batteries at a time.  Other models are available on Amazon that can charge as many as four at a time.

Overall the i4w is well made, easy to use drone that is loads of fun to fly.  If you are looking for a good drone to learn with or just want to have fun, I can’t recommend the i4w enough.  It has everything you need to get started, the batteries and chargers are easy to find which will provide longer flying sessions, and it is inexpensive enough that worst case you break it, you will not be out too much.

If you are interested in the Goolsky i4w it can be found here.