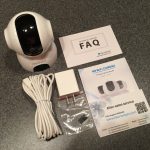 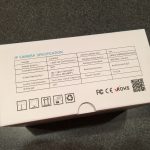 The IdeaNext Security camera has a 960p image sensor, pan and tilt abilities, two way audio, and remote viewing capabilities.  Setup and monitoring is done through an app on either an iOS or Android device.  It can not be used on a computer, Blackberry, or Windows Mobile device.  Included with the camera is a USB charger, long micro-USB cable, and a users manual.

The camera is capable of recording but requires a micro-SD card that is not included.  I had a spare 8GB card so I formatted it to fat32 and installed it into the back of the camera before powering it on.  Once the camera powered on I scanned the QR code in the user manual which took me to the App Store.  i downloaded and installed the app.  The camera setup was much easier than expected.  The app allowed me to scan a QR code on the bottom of the camera, name the camera, and input my WiFi credentials.  That was it, I could then view the camera.  I immediately went into the settings and turned on motion activated recording, which for whatever reason is labeled “Record manually.”  I also set motion detection to medium.  Lastly I went into the notification settings and disabled them as I have a dog and did not want to receive a notification every time he moved.

After this quick and easy setup I unplugged the camera and installed it where I wanted to leave it permanently.  I gave it a few minutes to boot up which I knew was complete thanks to an audible notification from the camera.  I then opened the app on my iPhone and immediately was able to view the camera, adjust the pan and tilt, and have a two way communication between the app and the camera.  The camera can pan 360* and tilt 90*.  I do wish the camera was capable of tilting down more but otherwise I have no complaint about its abilities.  The video quality from the camera is much better than I expected.  I have a few other security cameras, some of which cost much more that do not look nearly as good.  The same applies to the night vision of this camera, it is rated for 16 feet but I can see details at least 20 feet from the camera.  The app could use a little polish when it comes to looks but is much better than others I have used in the past.  My only real complaint is that the joystick to move the camera in the app is to sensitive and the only place lag can be found when reviewing the camera.  After using it a lot I have gotten used to it though.

Overall this is a great camera with a lot of nice features.  The only cons are in the app which could be fixed with an update.  I also tested the camera with the Android version of the app which looks and functions exactly the same.  This camera has replaced a much more expensive one in my house and most likely will not be replaced any time soon.

If you are interested in purchasing this camera, it can be found here.