What To Expect From Apple Tomorrow At Their Fall Event

The following is all based on my educated opinion of the leaks and rumors that have led up to today.

The showcase of this event will of course be the iPhone 7.  The real question will be how many models will their be this year and what will the notable changes be.  I believe there will be three models, iPhone 7, iPhone 7 Plus, and iPhone 7 Pro.  The 7 and 7 Plus will be almost identical spec wise other than screen and battery.  They will stick with the 4.7″ and 5.5″ respectivly but we should see a spec bump including higher resolutions, darker blacks, and a better color range.  Fans of the smaller 4.7″ device will be glad to see a the same camera sensor and optics as the 5.5″ model.  The camera will now be a 12MP sensor with f/1.9 and optical image stabalization.  It will also be a larger sensor compared to previous models which will help in low light conditions.  We should also see an improvement in the flash module.  One thing that will be missing from all three models is a 3.5mm headphone jack.  To compensate for this Apple will include Lightning EarPods and a Lightning to 3.5mm adapter.  Many people will be upset about this change initially but with Bluetooth 4.1 capable of producing great audio and the ability to incorporate a high end DAC into headphones powered over Lightning should result in much better sound quality.  Touch ID will no longer be a clickable button but a touch sensor that provides haptic feedback to simulate a button press.  We will also see two speaker grills on the bottom of the phone, one occuping the space the headphone jack normally would reside.  There will only be one speaker on the bottom of the phone but a second will be incroporated in the ear pice area for stereo sound.  Other changes will include a slightly thinner design and less antenna lines for a smoother look.  Storage options will now start at 32GB and go up to 128GB.  Lastly we will most likely see Space Grey dissapear with Space Black and Piano Black taking its place.  I have also seen rumors of a blue colored iPhone but I do not think that will happen. 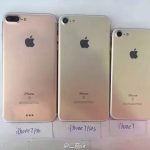 So what makes the iPhone 7 Pro so “Pro”?  It will be identical to the 7 Plus except it will feature dual camera sensors as well as an additional 1GB of RAM for a total of 3GB for image processing.  I have heard many ideas about how these dual sensors will be used but in my opinion they will be used for better color reproduction and a larger field of view, basically making everything look in focus.  They may also have different optics with one of the cameras utilizing a wide angle lens.  We will also see a 256GB storage option for the Pro model.

More people have tested iOS 10 openly than any other previous release from Apple.  I have been using it for months.  Notable changes include improvements to the notification shade, widgets (FINALLY, although a poor implementation in my opinion), and improvements in battery, performance, and security.  If you want to know more a quick Google search will result in more than you probably care to read about.

As for size I can pretty much guarantee the iPhone 7 Plus will be almost exactly the same size as the iPhone 6/6s Plus.  I was able to get my hands on an iphone 7 screen protector about a week ago which can be seen with my iPhone 6s Plus below.  Note the larger opening for the earpiece speaker to accomodate the loud speaker.  Otherwise it is identical to the one installed on my 6s Plus. 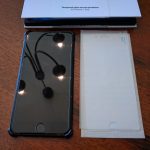 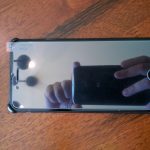 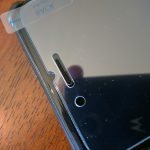 There have not been many leaks or rumors surrounding the next iteration of the Apple Watch but we will most likely see refinements and spec bumps in both the hardware and software department.  I do not expect it but I would not be surprised if we saw a round option to compete with many of the Android Wear options available.

The last MacPro was released in 2013 so it is way overdue for an upgrade.  The cylindrical design has been a crowd favorite and I would not expect it to change.  We will most likely see hardware improvements and maybe a smaller design.  As for iMacs the last release was also in 2013 and was nothing more than a refresh so we may see big design changes for them and I would not be surprised to see a touchscreen.

We saw updates to the MacBook recently and with a MacBook that is now smaller and lighter than the MacBook Air, I believe the Air will be retired.  Like its big brother the MacBook Pro is overdue for a refresh at least.  We will most likely see refinements in the design with an improved touchpad, keyboard, and possibly some sort of interactive touch buttons.  We should see specs bumps accross the board and a thinner, lighter design.  If we are lucky we may see a touch screen model.

I believe the iPad Pro 9.7 has completely replaced the Air line so we may never see an iPad Air again.  The one iPad that could use an update is the mini.  This would fill the void for an inexpensive Apple Tablet and with modern specs could still be a great device.

We will most likely see an iPad refresh with it borrowing specs and traits from the iPhone 7 just as we have seen in previous models.  I expect improvements across the board.