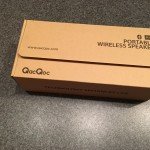 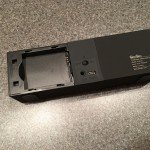 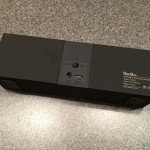 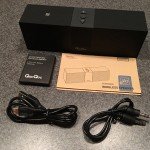 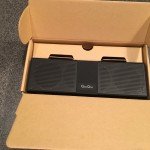 The QacQoc comes packaged in a colorfully sleeved box with a unique unboxing experience.  Included with the speaker is a removable 1500mAh battery, micro-USB charging cable, aux cable, and users manual.  The enclosure houses two 3W speakers and a passive radiator to help it reproduce lower frequencies.  The majority of the enclosure is coated in a soft touch finish, while the grill is a hard plastic, and they gray band around the middle as well as the buttons are rubber.  On the top of the enclosure is a microphone, NFC contact point for easy pairing to Android devices, and three buttons.  One button is for increasing volume and skipping tracks, one for play/pause/answer/end, and one for decreasing buttons and skipping back.  On the rear of the device is a power slider, aux jack, micro-USB charging port, product info, and a removable door to access the battery.  On the bottom are two nice sized rubber feet to prevent it from sliding around or rattling.

The most unique feature of this device may also be the most pointless.  This is the first Bluetooth speaker I have used that has a removable battery.  At first I thought this was an awesome feature until I looked around the web to purchase a spare but could not find one.  The NFC is a much welcomed feature is it makes pairing the device effortless.  The microphone on the speaker is a nice feature to take advantage of hands free calling and voice commands.  I felt the mic on the device worked OK but their was sometimes an echo on the other end.  As for output this little speaker screams.  Given its small size it gets much louder than expected and for the most part has very little to no distortion.  I fell QacQoc focussed a little too much on the low frequencies with this speaker.  That being said given its tiny drivers and small passive radiator it handles bass pretty well although I found the mid bass to sometimes be over emphasized and somewhat muddy.  Another negative side effect to the focus on the low end is a lacking of higher frequencies that are most notable with natural sounds such as symbol crashes.  That being said given the size and price of the speaker it does well in almost every area.

While their are better sounding speakers available, you will have a tough time finding one at this price that sounds better, gets louder, or that has NFC pairing.  If a replacement battery were available it would add quite a bit to the convenience of this speaker.  The 18 month warranty will also be hard to beat at this price point.  Overall I am fairly pleased with the QacQoc and do not have a problem recommending it.

If you are interested in purchasing the QacQoc Bluetooth speaker it can be found here.