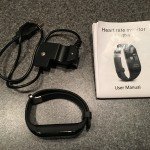 The Guide Fitness Tracker is a wrist worn tracker that has the ability to track distance, calories burned, sleep, and heart rate.  It is IP67 water and dustproof rated which means it can be worn while swimming and taking a shower.  The device features a rubber, watch style band with a very easy to read, touch, IPS display.  Included with the tracker is a brief but easy to follow manual, and a clip on charging cable that works very well.

To test the Guide Fitness Tracker I wore it alongside a FitBit charge for a week as I have come to trust that the FitBit is fairly accurate.  I synced them both to my iPhone and installed the HPlus app to monitor the Guide Tracker.  I tried my best to check both trackers mid day, just after work, and before bed.  Occasionally the steps would differ as much as 10% between the two trackers at mid day but by the time I went to bed they were always very close to each other.  Close enough in fact that I would not even question the difference.  Before anyone says something, I wore both trackers on the same wrist to minimize differences.  The estimated calories burned on both trackers showed similar results to the steps but I felt the Guide tracker seemed to be a little high on its estimates.  As for the heart rate monitor I used my Moto 360 to compare.  For the most part the Guide tracker matched the Moto 360 very closely but occasionally would get an off the wall reading.  I am assuming this could most likely be corrected with a software update that would prevent readings that do not make sense.  Because of the randomly bad reading it made the all day heart monitoring act up at times as well.  I also found that by leaving the all day monitoring it would sometimes get stuck trying to determine the heart rate until I manually checked it using the touch screen.

The Hplus app does a great job of keeping track of all your data.  It is fairly easy to use and navigate.  This also applies for the GUI on the Guide Tracker.  I found it easy to cycle through different views, information, and checking of my heart rate.  Overall this is a decent tracker and could be great if the hear rate monitors was more consistent.  At its current price this may be one of the best bangs for your buck as far as fitness trackers go.

If you are interested in purchasing a Guide Fitness Tracker it can be found here.