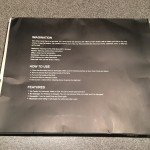 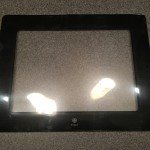 Have you ever wanted to mount your iPad somewhere so that numerous people could see it, or above the counter to keep it away from the food while you are cooking, or maybe in the bathroom to watch something while brushing your teeth?  The STINO mount solves all of these problems.  It uses a specially formulate nano-technology to allow it to stick to any flat surface without leaving behind a residue or any marks.  The device itself is pretty simple.  It consists of a clear window with a soft foam frame that your iPad fits inside of, with the nano-tech on the foam.  All you have to do is set your iPad face down against the window and then place the STINO with your iPad in it on any flat surface.  At first I was skeptical, but after trying it on numerous surfaces, I am a believer.  Now that I have one I find myself using it more and more especially with my iPad Pro 13. 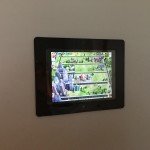 The STINO is currently available for the iPad air and iPad Pro 13.  Throughout my testing the only issues that I ran into were that the power button on the iPad is not accessible while in the STINO, it is hard to press the home button, and the fingerprint sensor does not work.  The inaccessible power button is not a big deal because you can still use the home button to wake the iPad.  The fingerprint sensor issue is not a big deal either because you can still enter a pin.  As for the difficult to press power button, it gets a little frustrating.  Thankfully once awake the touch screen works perfectly while in the STINO.  I was able to play Sim City with no problem and watching YouTube videos was much more enjoyable since I no longer needed to hold the giant iPad Pro.

Overall I feel that the STINO is a great product.  It is made well and does exactly what it says, and does it well.  If they find a way to overcome the home button issue, it would be the perfect solution to a long standing problem.

If you are interested in purchasing a STINO or finding out more information, it can be found on their Kickstarter page here.