The 1byone Smart Scale is one of many in an ever growing market of smart scales.  Like many of its competitors, it has a glass top and plastic body with an LCD screen to display information.  Included with the scale are four AA batteries and a user’s manual.  Setup of the scale is as easy as installing the iWellness app which is available on both Android and iOS devices.  Throughout my testing I found the Android version of the app seemed to be more consistent and correct in its calculations.  The scale combined with the app is able to calculate, store, and compare weight, body water, body fat, BMI, BMR, muscle mass, bone mass, and visceral fat. 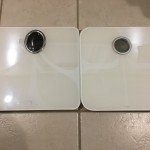 To test the 1byone scale, I used it side by side with my Fitbit Aria which I have found to be very accurate compared to readings I have gotten at the Dr.  Throughout my testing the 1byone scale stayed within 1% of the Fitbit scale with the biggest difference in weight, which the 1byone scale was always 0.8Lbs high.  More importantly, the scale was consistent in its readings which I have found is not the case with many digital scales.  The iWellness app is very easy to set up, and will allow you to record and keep track of your stats over time.  The scale is able to keep track of up to 10 people, so even if you have a large family, the scale should be able to accommodate you.  The only downside I found to the scale/app, is that you must be connected to the scale via Bluetooth and have the app open in order to take advantage of collecting all the stats.

Overall the 1byone is a great scale that is easy to use, combined with a one year warranty and the fact that it is less than a quarter of the price of some of its competitors, makes the 1byone Smart Scale easy to recommend.

If you are interested in purchasing the 1byone Smart Scale it can be found here.