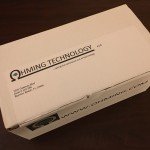 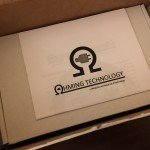 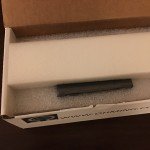 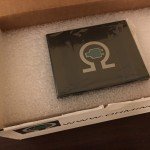 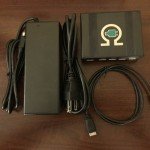 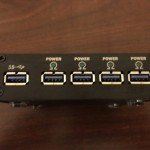 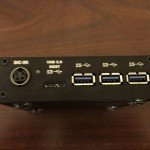 The Ohming Technology Charge M.E. is a premium multi device charger and USB 3.0 hub.  It has a premium yet slightly industrial feel to it all the way down to the packaging.  The box it comes packaged in is solid white other than branding and the business address.  Once the top flap is opened and a soft piece of foam is removed, you will find the device set inside a piece of molded foam.  Once the device is removed you will find another box containing the manual, power adapter and cable, and a three foot USB 3.0 cable.

The device itself is made entirely of aluminum adding to the industrial feel I mentioned earlier.  The design looks very modern and high tech which should make it feel right at home next to a bunch of electronics.  The Ohming Technology logo, which I really like, can be found printed on top of the all black device in silver and green which looks great.  On the front you will find four dedicated power USB ports capable of charging at 2.4A each, as well as a USB 3.0 data port which is also capable of charging at 0.9A.  On the bottom are four rubber feet which do a fantastic job of holding the device in place even with many devices plugged into it.  You will find aluminum heat sinks on both sides that are built into the casing.  On the back of the device you can find three USB 3.0 ports that are capable of charging at 0.9A each, a proprietary power connector, power LED, and a micro-USB 3.0 port for connecting a computer.

Thanks to the well written manual I was able to quickly get the device powered up and connected to my laptop.  The manual also does a great job of explaining the differences between the power and data ports.  Windows 10 was able to install the USB 3.0 hub without any special software or issues.  I tested the hub by transferring large files to a USB 3.0 solid state disk.  Transferring the file through the hub was only seconds slower than connecting directly to the laptop.  On smaller files their was absolutely no difference at all.  As for the charging ports, I only have one USB multi-meter so I could not test ports simultaneously but the Charge M.E. was able to charge an iPad Pro at 2.42A on each of the four charging ports.  I also tested the device by gathering seven devices to charge and plugging the USB SSD into the eighth and transferring the same large file as earlier.  The device had no problem charging all seven devices and was still able to transfer the file at the same speed as when nothing was being charged.  What I found even more impressive is that the Charge M.E. never even got warm while putting as much load as possible on its electronics.

At this point you are probable thinking the Charge M.E. is the ultimate device.  It is an awesome USB hub and charger, but it is my job as a reviewer to find the flaws even if it means being picky.  The power LED on the device is in the rear, so in a well lit office setting you will have to turn it around to see if it has power although the advantage to it being on the rear is you will not have to deal with a bright LED shining all the time.  The only other complaint I have about the device is the size of the power supply and its proprietary connector.  The power supply is huge by todays standards although I know it most likely needs to be that large to provide 60W of clean power to the Charge M.E.  I wish they had used a standard power connector to make it easier to find a replacement should you ever need to.  Thankfully the power cable is long enough that the power supply can be tucked out of the way.

Overall the Ohming Technology Charge M.E is a fantastic device.  It works well as a USB 3.0 hub and also as a high power four port charger.  The fact that Ohming has been able to combine the two in a compact and attractive, after hiding the power supply, enclosure is awesome.  If you are interested in purchasing a Charge M.E. you can do so here.  Before you click the link I will warn you, it is a bit pricey, but in this case you truly do get what you pay for.