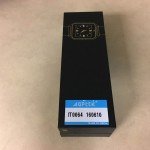 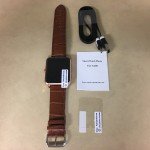 The AGPtEK Smart Watch is constructed of aluminum and glass with a leather band.  The design is very similar to the Apple Watch but is quite a bit bigger.  The device features a MTK6260A CPU, 128MB of RAM, 64MB of ROM, support for up to a 32GB TF memory card,  GSM cellphone capabilities, Bluetooth 4.3, and a 1.54″ 240×240 resolution touch display.

The watch can be used in conjunction with a smartphone or as a standalone device if you supply an activated, compatible GSM SIM card.  As a stand alone device you can make and receive calls and text messages.  Paired to a smartphone via Bluetooth you can make or receive calls and texts as well as receive notifications for them.  If the watch is paired to an android device with the proprietary app installed you can also receive notifications from just about any app as well as control certain elements of the phone such as the camera.

The software on the watch is fairly intuitive and offers a few different options as far as the appearance goes.  The watch is waterproof and seems to be built well.  Pairing the watch both to an Apple and Android device is simple and range was more than acceptable.  Overall the only fault I could find with the watch is the camera.  It is in an awkward position to take anything but a selfie and even then the quality is OK at best.  It will work in a pinch but I would not count on using the camera.

Overall the watch will work very well for someone trying out a smart watch.  While it will not compete with the high end smart watches it is still perfectly capable of satisfying the average user.

If you are interested in the AGPtEK Smart Watch it can be found here.