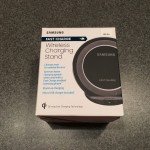 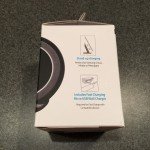 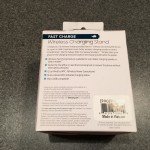 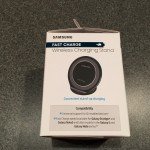 With summer finally upon us many of us will be traveling whether it is to see family, go to the beach, or just unwind at a vacation spot.  Between all the traveling and the busy lifestyles many of us live, it is a huge inconvenience to be bothered with having to charge our electronics.  Many of us live by our mobile devices, they keep us organized, up to date, educated, and only a few taps away from our friends and family.  Samsung and Verizon wireless are trying to eliminate the need to charge as often and make charging happen more quickly by providing us with the Samsung Fast Wireless Charging Dock.

The Samsung Wireless Fast Charger includes their Adaptive Fast Charging wall charger and a white USB-A to Micro-USB cable that is roughly 5 feet long.  The wireless charger has a weighted base and positions the phone at roughly a 45* angle which is perfect when positioned on a desk or bed side table.  Combined with the Galaxy S7s always on display it doubles as a clock, alarm, notification center, and much more. 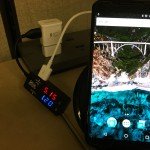 Most Wireless chargers supply 5 volt at 1 amp or 5 watts of power.  The Samsung Fast Wireless Charger has two charging speeds that are very similar to Qualcom’s Quick Charge 2.0 specs.  The wireless charger will charge at 9 volts at 1.67 amp or 15 watts until the device reaches roughly 60% at which point it will charge at 5 volts at 2 amp or 10 watts.  As you can see even the slowest charging rate is double that of a previous generation wireless charger.  The next step with a QC 2.0 device would typically be 12 volts at 1.25 amp.  I can only assume Samsung did not push for the next step due to heat or some other limiting side effect.  In summery a compatible device should be able to charge as fast on this wireless charger as it does plugged into Samsung’s Adaptive Charger.  Throughout my testing I found this to be mostly true.  I say mostly because the device was not able to charge quite as fast which I assume is because the wireless charging can not be 100%  efficient whereas a wired connection can get pretty close to 100% efficiency.

Overall the Samsung Fast Wireless Charger is a nice device that looks great and is built very well.  I am glad that Samsung includes a charger and cable with this device, and that it is compatible with all Qi compatible devices at the wireless charging speed they are certified for (My Nexus 6 was able to charge at 5V at 1.2A which is quite a bit faster than most wireless chargers).  My only real complaint with the charger is the brightness of the LED indicator on the front.  If you use this charger in the bedroom, the LED may be too bright for you.  If you are interested in purchasing this charger, it can be found at your local Verizon Store.