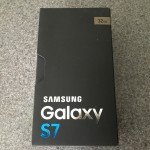 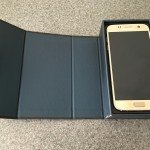 I have been fortunate enough to to review every Samsung S line phone since the Galaxy S4 and used the S3 and S2 before that.  Samsung has come a long way since the all plastic S2 and moved to the glass/metal design with the S6.  The S7 maintains this metal and glass design but manages to fix some, but not all, of the issues that plagued the S6.

The S7 has about the same footprint as the S6 but is slightly thicker due to a 450mAh larger battery.  The device is completely glass on both the front and rear with an aluminum ring around the outside of the phone.  Compared to the S6 the camera hump is now slightly less and therefor the phone does not rock quite as bad when placed on its back.  One design flaw that Samsung did not overcome with the S7 is how slippery it is.  In fact, because of the curved edges of the rear glass, I found the S7 to be the slipperiest phone I have ever used.  This will only be an issue for people that do not use a skin or a case, but I would highly recommend doing something to this phone to help prevent constantly playing hot potato with it. 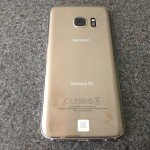 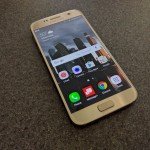 Samsung was able to improve their TouchWiz interface significantly with the launch of the S6 and they continued the refinement with the S7.  Other than the bubbly, childish looking icons, the interface does not stray too far from stock Android which is a welcome improvement.  Of course, thanks to the customization available with Android, combined with Samsung’s theme engine, you can make the device appear to be running stock Android with a theme, launcher, and icon pack.  Samsung has also cut down some on the included apps which is definitely a step in the right direction.  Unfortunately, you will still find two or sometimes even three apps that are pre-loaded that serve the same purpose between the included Google, Amazon, Samsung, and Verizon apps.  Thanks to the increase of RAM to 4GB, the phone never had any lag or hiccups, even with all of this bloatware running.  The refinement of the software is also displayed in the highlight features of the software.  Some of the gimmicky features have been dropped while the more useful features like dual window have been improved.

The one place that Samsung has been one of the leaders for some time now is in the camera department as far as smartphones are concerned.  The S7 is no exception to this trend.  Even though the rear camera is down 4MP from the S6, it manages to take significantly better shots thanks to the improved sensor and Dual Pixel technology.  In typical Samsung fashion, the pictures sometimes look over saturated, but many people, including myself, prefer this.  The front camera has also improved with a wider viewing angle and better image processing for those perfect selfie shots.

Overall the Samsung Galaxy S7 is a nice and welcomed improvement over the S6.  The biggest issue that plagued the S6 was the poor batter life which Samsung has fixed with a 450mAh larger battery, an updated version of Android, and some behind the scenes software tweaks.  They also managed to improve the already great cameras and the S7 hands down has the best cell phone screen on the market currently.  Throughout my use the only real complaints I have are the slippery design and the bloatware.  The slippery design is a trade off for the beautiful cosmetics of the device and is easy to overcome by using a case or skin.  The bloatware is also easy to tame by disabling any unused apps in the settings.  The Galaxy S7 combined with Verizon’s awesome 4G network make for a winning combination in speed and usability as well as crystal clear HD calling.  If you are currently in the market for a mobile phone that checks almost every box, the Samsung Galaxy S7 from Verizon should be one of the top devices to consider.

One thought on “Review: Samsung Galaxy S7 for Verizon”