An alarm system is one of the more difficult tech items to review due to the complexity of them and the amount of pieces that work together to complete the system.  In this review I will do my best to describe the product and my experience using it.  I set this alarm up in a test scenario in one room of my house.  I did this not only to make it easier to test the system as a whole, but to prevent the system from interfering with my current alarm system that actually uses the same monitoring company, more on that later. 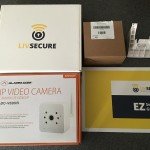 The LivSecure alarm system was delivered to my house in two separate boxes.  In the first box, which felt empty, I found a yard sign.  It came in 3 pieces, two for the post, and the sign itself.  It was easy to assemble and since the post is metal and the sign plastic, it should have no problem holding up to the elements.  I also like the fact that it is large enough to see from the street but not so big that it looks ridiculous up by my house.  In the second box I found a total of three boxes as well as a stand for the control panel and the “EZ Set-up Guide.”  This is where the real fun began.  One box housed an IP camera and a universal mount for it.  In the second box I found a smoke detector.  Inside the last box was the control panel, power adapter, 3 door/window sensors, 2 window decals, a motion sensor, and a key fob. 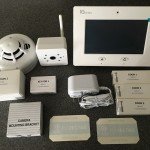 I immediately plugged the control panel in and went through the initial setup and looked around the menus.  Next I installed the batteries in the smoke detector and placed it high on a shelf to simulate it being mounted on a wall.  Next I installed the door/window sensors on a door and two windows.  I installed the batteries in the motion sensor and placed it high in one corner of the room to make it cover as much of the room as possible.  I placed the IP camera in the opposite corner after going through the setup and getting it connected to my wireless network.  Lastly I got the key fob ready to use.  Overall the setup was pretty simple as most of the pieces were pre-configured with the most difficult being the camera.  That being said, even the camera was extremely easy to set up using the included directions.  I like that the set-up guide even includes recommendations on where to mount each sensor.  The last thing I did was setup the online accounts for LivSecure and Alarm.com which is who they use for monitoring.  Alarm.com has been rated as one of the best monitoring companies time and time again so this was a welcome surprise.  It also happens to be the monitoring company that my current alarm system uses so I already knew my way around the mobile app and website.  To better review the alarm I installed the mobile app on my iPhone 6s Plus, whereas the app for my personal alarm is installed on my Nexus 6.  If you have the option to choose, the iOS app is slightly easier to use than the Android app.

Even though it may look like this alarm system came with a lot, their are many more sensors available including: smart thermostats, smart sockets, smart switches, and many more.  The panel is capable of reading data from these sensors and also controlling them remotely using the mobile app.  I love the fact that this alarm allows you to purchase these sensors, install, and configure them on your own.  This makes expand-ability less expensive and much easier than using an alarm company that requires you to pay one of their technicians to do the work. 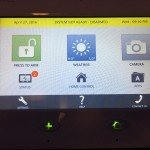 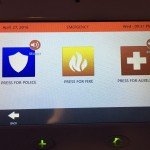 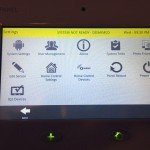 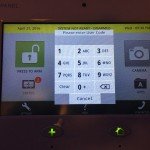 The panel is laid out in a simple grid style layout.  On the home screen you will find a button to arm/disarm the system, a button for the weather, one to view cameras connected to the alarm, the status of the system, home control, apps, settings, help(which is available on almost every screen), and contact.  The help screen provides quite a few videos to help you setup and use the alarm.  This is a nice touch for people that are not familiar with alarm systems.  The contact us button is also nice if you need more information on setting up or using the alarm.  The only two physical buttons on the alarm are a home button and an emergency button. Upon pressing the emergency button you can select police, fire, or auxiliary which I believe you would use for a medical emergency.   The police and auxiliary alarms offer a silence option which may come in handy if you are ever in a bad situation.  The settings menu contains numerous buttons such as user management, system settings, home control settings and devices, system tests, panel reboot and power down, and more.   Almost all functions of the panel require a user pin to perform, therefor keeping unauthorized users from making changes to the system.  For the most part the user interface is intuitive and I only experienced a few minor lags when waking the device or coming from the picture frame mode.  My only real complain about the system is the terribly robotic sounding voice that makes the announcements.  I wish they had chosen a more realistic or at least a more calm voice for the general announcements.  The panel does gain 10 nerd points because I am almost positive it runs on a modified version of Android.

Throughout my testing I only had one issue with any of the devices.  The motion sensor wanted to be difficult and keep disconnecting.  Once I removed the sensor from the system and added it again the sensor performed as it should.  Otherwise the sensors performed very well.  The reaction time to the door and window sensors was minimal if their was any delay at all.  The motion sensor, once fixed, was quite sensitive.  I do not have any small animals to test the sensor with, but my 110lb dog set the sensor off with very minimal motion.  The camera video quality was great although their seemed to be about a 30 second delay which I do not experience with my personal alarm cameras.  To me this sin’t a big deal as long as it records when it is supposed to.  The key fob worked very well and easily worked outside of my house, although I do not believe I would use it much since the mobile app provides the same functionality and much more.  The inclusion of the two window decals and yard sign is great as they will be the first defense against intruders and will cause them to turn away almost every time.   Should the alarm go off the panel is very loud and should have no issue being heard throughout the common size home.

Overall I am very satisfied with the LivSecure LivEssential Plus alarm.  It is easy to set up, provides for easy and affordable expansion, uses Alarm.com for monitoring, has a great mobile app, and wonderful tech support.  If they would change the announcement voice to something more pleasing it would be very difficult to find any faults in the system at all.  All of this combined with their very competitive pricing makes me have no problem recommending this system to anyone looking for an alarm or home automation.

If you have any questions about the alarm, please ask in the comment section below or head over to the LivSecure website where you will most likely find all of the information you need.