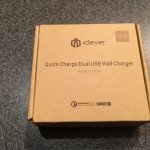 The iClever BoostCube charger came packaged extremely well in a minimilistically designed box.  The only thing included with the charger is some product documentation.

The BoostCube is constructed of plastic and measures roughly 2.5in by 2.5in by 1in.  It features a flip out power plug, a QC 3.0 USB Type-A port that is backwards compatible, and a Smart ID Type-A port.  The charger is capable of producing a total of 36W of power which means it is capable of charging a QC 3.0 device as well as a device at 2.4A at the same time.  In other words, it can charge two of the most power hungry devices simultaneously and never break a sweat. 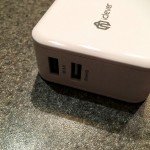 The charger is a little on the big side, but considering what it is capable of it is worth dealing with the size.  That being said it is still small enough to stow away while traveling.  The flip out power connector also helps with the stow-ability.  The BoostCube had no problem charging everything I could throw at it, at the devices max rated charging power and not once did it get hot.

Overall the BoostCube exceeded my expectations and has replaced my previous charger in my gadget bag.  If you are looking for one charger to do it all while on the go, the BoostCube is your charger.

If you are interested in purchasing one of these chargers, they can be found here.