The Trendwoo Bluetooth speaker came packaged in a colorful box with a flap that opens on the front. When you open the flap you are greeted with a clear window that displays the speaker through a clear window that is housed in a molded piece of thin plastic. Also in this mold, but not visible, is charging and aux cable. Also inside the box, you will find a brief user’s manual. 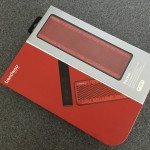 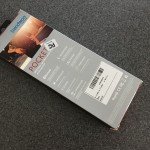 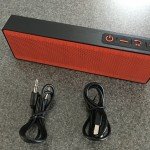 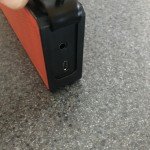 The firs thing you will notice about the speaker is how thin it is. The total thickness is less than an inch. The build is also very nice, with the entire unit being made of a hard plastic an aluminum. The plastic has a brushed texture to it and some portions, including the buttons, are a soft touch rubber. The speaker features the usual micro-USB chargin port, 3.5mm Aux port, volume/track buttons, power button, and play/pause/answer/end button. Setup is like any other Bluetooth audio device. Once it is paired it can be used for hands free calls, thanks to the built in mic, and also for voice commands and to listen to audio. The sound quality from the speaker is pretty good. It has surprising low end for its size and how thin it is. The highs are very clear and mids remain calm even at high volumes. As you would expect from a speaker this size, at high volumes the low end fades and the highs become slightly distorted. That being said, it gets much louder than many speakers in this class and at roughly two thirds volume it is plenty loud and still sounds great. At this volume level it easily competes with speakers that cost significantly more.

If you are interested in the Trendwoo Bluetooth speaker, it can be found here.